Overview: TheAdsTeam is a paid traffic service to help websites get traffic through banner impression or real visits.

You have to buy AdPacks for a specific number of banner impressions/direct visits you want. AdPacks allow you to share in TheAdsTeam’s revenue.

TheAdsTeam Review – How does it work?

TheAdsTeam is a Paid Traffic platform newly launched Oct 2016 “With an aim to become one of the World’s Largest Advertising Platforms.”

There are already a lot of Paid Traffic advertising platform such as Empire Kred and LeadsLeap 2.0 in the Online World.

Traffic Monsoon was ordered to shut down in 2016 by the Securities and Exchange Commission and yet there are already new companies popping up mimicking the exact same model.

Why don’t they just learn the lesson from Traffic Monsoon?!

You could also earn some money by purchasing AdPacks by

Let’s find out more from this video.

TheAdsTeam Review – How much does the Ad Pack cost?

Let take a look at the different types of Ad Pack and it’s cost.

Each Ad Packs gives you a different amount of Banner clicks, Website Credits and Text Credits.

As you can also see that each Ad Pack gives you Revenue Share of up to 120%.

Do read the FAQ section at TheAdsTeam Website for further clarification of the Ad Packs.

Here are some of the excerpts:

What is Ad Pack?

As an incentive, we’ll share our profit with members who purchased ad packages if we receive any profit. Members must log in, and view 10 ads daily to qualify to receive profit share. Please note that this earning depends on the sales of products and services. We cannot and do not guarantee any earning or speed of earning from profit sharing.“

Another way of earning at TheAdsTeam is by building a team of your own referrals. And this is more like an MLM to me.

Referral compensation is up to 5 levels:

As your referrals and purchased Ad Packs grow, you’ll be promoted to different leadership positions: 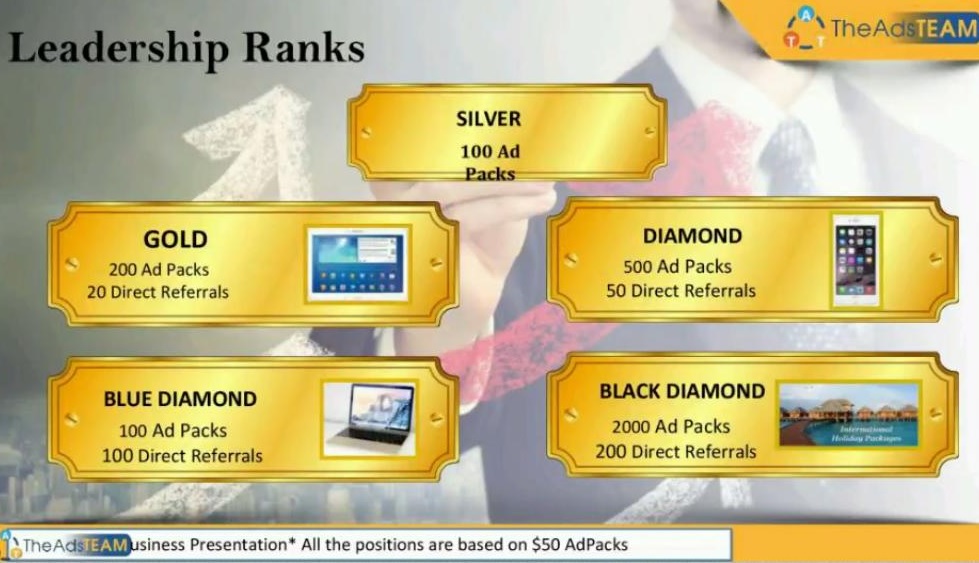 The benefits of a leader include:

This is where most people missed out.

Please read the T&C and Earnings Disclaimers carefully before you decide to put your money into anything.

Here are the links.

Once I learned that TheAdsTeam is selling AdPacks with revenues share of up to 120%, I was thinking “Really? These guys don’t learn?”

Although there are people claiming online that they are making money at TheAdsTeam, however, I have some concerns after exploring and researching on it.

#1 Reputation of the Owners.

I found out from behindmlm.com that the owner has involved in the “OneCoin” Ponzi Scheme before.

Also,  from the same website,  it is known that there were actually 3 owners at TheAdsTeam but one of them, Muhammad Imran, decided to leave the company.

“Muhammad Imran has been in touch and advised that, as of October 24th, he is ‘not longer belong to TheAdsTEAM any more’. ” – behindmlm.com

The reasons of Muhammad Imran leaving were unclear.

Despite TheAdsTeam claims that they are legal selling Ads Banner and Ad Space credits. The owner of Traffic Monsoon, Charles Scoville claims the same too.

And there are many people claiming that they make money at Traffic Monsoon too!

What is the fate of Traffic Monsoon at the end?

Will TheAdsTeam has the same fate too?

With the MLM type compensation, are the members driven to recruit?

Will existing members try enticing new members to buying Ad Packs to “make money”, without the actual need of the Ads Banner and Ad Space credits?

Again, take note of the disclaimer:

We cannot and do not guarantee any earning or speed of earning from profit sharing.

Paypal has strict policies on Companies using its service.

Thus, if Paypal suspects fraud of any kind, it will freeze the company account as we have learned from Traffic Monsoon Case.

Why does TheAdsTeam not use the Paypal service? Think again.

Moreover, does the traffic source’s demographic matches your affiliate niche that leads to conversion?

Are you willing to invest into Ad Packs to test the traffic first?

I started my Affiliate Marketing business in 2014 and learned how to generate traffics (free or paid) to my website from Wealthy Affiliate.

It is where I learned how to build a Successful Online Affiliate Marketing Business right from the fundamentals.

The best thing about Wealthy Affiliate is that I could start learning how to build my Online Business Passive Income with ZERO prior knowledge on Affiliate Marketing and how to generate traffics.

Because Wealthy Affiliate will train you how to generate targeted traffics to your own specific niche.

Not only that it comes with complete Keyword tools and Website building and hosting suite, Wealthy Affiliate comes with live support and helps from the owners and the community.

You can even test-drive it first with FREE* Starter Membership in the next few minutes!

I have written a comprehensive Wealthy Affiliate Review and perhaps you can find out more from there.

I rated TheAdsTeam 1.0 stars because I think it has high risk having the same fate as Traffic Monsoon.

Personally, to achieve a niche targeted traffic with targeted audiences, I would learn from Wealthy Affiliate.

Wishing you the best!

*Please note that some countries are not able to join as FREE Starter Members due to Wealthy Affiliate University’s Anti-SPAM policy.

2 thoughts on “TheAdsTeam Review – Legitimate or Scam?!? You Won’t Believe it!”